73 Seconds That Changed The World 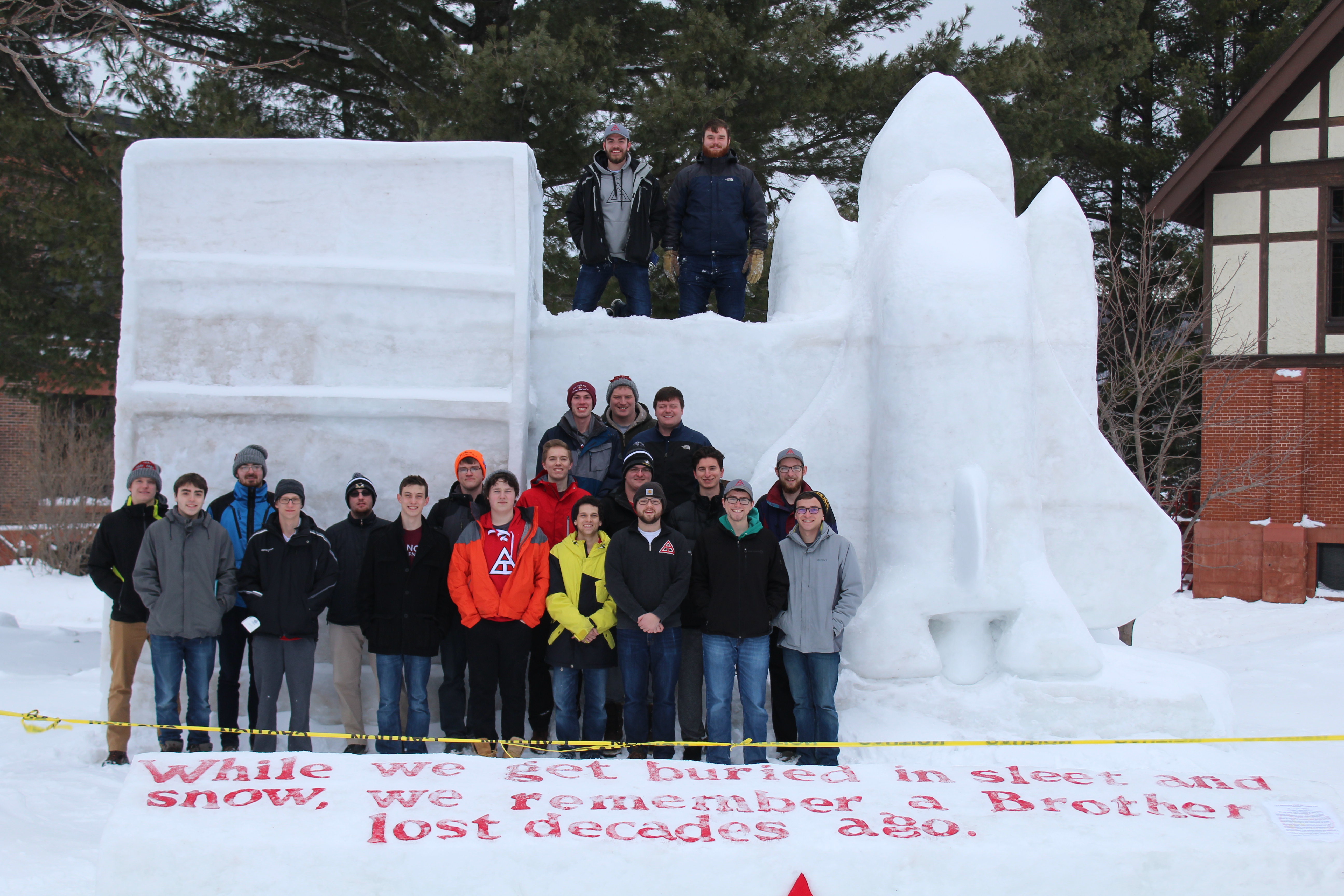 While we get buried in sleet and snow, we remember a Brother lost decades ago.

The sight of Michigan Tech’s campus after winter carnival is familiar to many: overnight, the “Winter Carnival is an Alcohol Free Event” signs are exchanged for snow statues small and large decorating the open spaces on campus. What at times can look like a scene from the Empire Strikes Back changes overnight into an icy art exhibit, injecting life back into our frozen corner of the world.

By the time my first Winter Carnival as a Brother of Triangle rolled around, I knew one thing for certain: I wanted to make a statue that stood out. I had worked on snow statues during winter carnival before, but I had never been part of a month long statue. Making the smaller overnight statues had been fun, but those statues were nothing special. I wanted to be part of something that would make an impact on the campus landscape in a way I could be proud of.

I was excited to start coming up with ideas for our statue, but when I found out the theme of Winter Carnival, I must admit I was stumped. “Snow Cascades Across The Decades”. I knew the themes were traditionally vague so that there are a variety of statues, but this? The theme might as well have been “As we settle into this frigid weather, make a statue of anything that has happened ever”. Without a whole lot to go on, I had a lot of thinking to do. Did we want to make a statue that encapsulated the feelings and emotions of an entire decade? Capture an event so significant that it is interchangeable with the decade in which it happened? Or did we want to showcase a historically significant event to Triangle?

Myself and several other Brothers put our heads together to figure out just what on earth we would do, and eventually one idea rose to the top. It captured one of the most shocking moments from the 1980s, and would stand as monument to a Triangle Brother lost too soon.

January 28th, 1986, was a sorrowful day for the entire United States, as on that day the Challenger space shuttle disaster claimed the lives of all seven crew members and left the entire nation speechless. I had heard stories about the Challenger in the past: my ninth grade English teacher grew up in Florida and lived close enough to watch the launch from her elementary school. She was anticipating seeing a streak of light and white smoke head into the sky that day, but instead witnessed a large fireball and was swiftly rushed back inside by her teacher. I knew that the disaster had a huge impact on anyone who grew up in the 80’s, but I didn’t know that it also had an impact on Triangle. One of the men who died in the explosion, Ellison Onizuka, was a Triangle Brother, and we decided we would commemorate our fallen Brother with an icy monument to the Challenger and it’s crew.

When it came time to write a description for the our statue for others to read as they were enveloped in the aftermath of All Nighter, we made sure to tell the story of the Challenger crew, and the Triangle Brother we lost on that day:

On January 28th, 1986 the Space Shuttle Challenger took flight. Tragically, after 73 seconds, the shuttle exploded in air. A small engineering failure caused an internal explosion that rocked the world of space flight for years to come. A Triangle Brother from the University of Colorado, Ellison Onizuka, was aboard this spacecraft during the accident. This moment will forever remain in the memories of Triangle Brothers across the nation as the loss of an excellent man. Onizuka was known for his achievement in the fields of engineering and science as well as his distinguished career as an astronaut. The statue before you features a snowy resemblance of the launch pad, including the support tower, service arm, and Challenger Space Shuttle.

With a statue idea in hand and purpose to drive us, we got to work on bringing it into fruition. Building a month long statue, as I found out, was a vastly different experience than working on an overnight statue. For an overnight statue, the excitement of All Nighter is in the air. It’s a more casual affair, and if you’re doing it with your hall your RA is probably just there so they don’t get fined. The cold doesn’t cut as deep, and you can go inside whenever you want.

While an overnight statue isn’t easy by any means, I found out very quickly that a month long statue is a beast all of its own. You don’t have a pile of snow delivered to your site whenever you need it by your friendly neighborhood front end loader. You have to haul all of the equipment down to the statue site every night, pull it all out of the box and set it up, then put it all back and take it back up to the house when you’re done. And don’t even get me started on the shoveling. It’s kind of fun on the first day of statue, actually; you get a pretty decent workout in and singing “Hi ho, hi ho! It’s off to work we go!” like you’re one of the seven dwarves is pretty entertaining. But after a while you run out of Disney songs to sing and it’s more reminiscent of clearing off the driveway than gathering snow to build a statue.

Despite having an evening full of hard work every time I went out to work on the statue, however, it was hard to squash my spirits. Every scoop of the shovel, every bucket filled with snow, and every swing of a hatchet was an investment of my time and energy in a Michigan Tech tradition. It was an investment in Triangle. My past experiences working on statues during Winter Carnival All Nighter didn’t really leave me with something that I could be proud of, but this year was different.

There are a lot of memories I’m going to remember fondly from my time at Tech. I’m going to remember exciting hockey games and late nights finishing assignments with friends. But I think one of the greatest of those memories will be seeing my first statue as a Triangle Brother in the light of day on Thursday after All Nighter. Seeing the Challenger shuttle towering above me made all of the long, cold nights building it worth it. This was a statue I could be proud of.